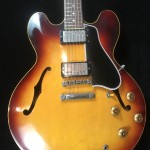 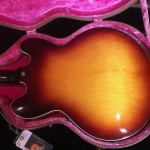 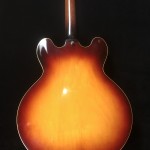 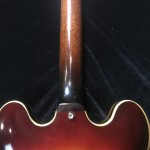 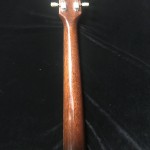 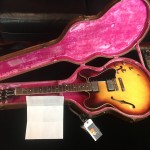 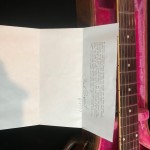 This guitar is in very good original condition. No modifications, no cracks, no touch-ups, other than replaced tuner buttons, which is common for 1959 guitars.

These early dot-marker 335′s have been known as “Burst Killers” due to their aggressive sound.

This particular one has a beautiful Sunburst finish.

The build on this guitar started in 1958, which gives it some of the more notable ’58 features.

The neck profile is a big ’58 round chunky neck.

It has factory large frets.

It has two double white PAFs; the covers have never been removed.

It has a thinner top which gives it a slightly different, desirable sound compared to a later ES guitar.

The bridge is lowered almost all the way down, and the action is good but not extremely low.

This is the first production year for the Electric Spanish (ES) guitars.

It comes with a letter from the original owner, as a certificate of authenticity.

It comes with its original clean, brown 5-latch case.

The guitar is 8.8 condition out of 10, showing light weather checking and normal playing wear.