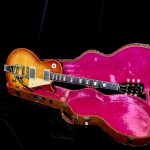 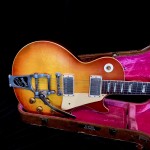 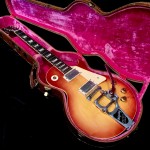 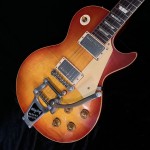 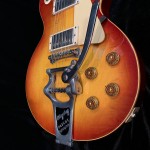 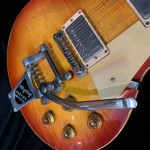 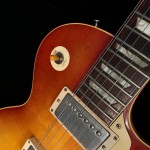 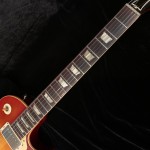 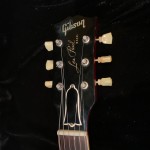 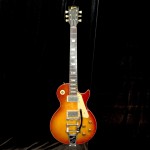 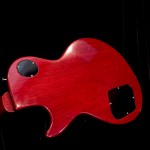 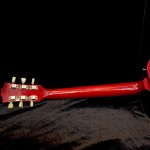 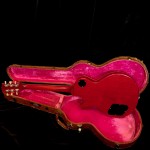 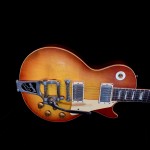 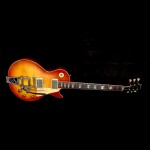 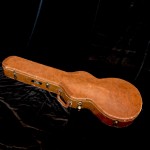 This has a Gibson factory installed Bigsby, with a unique winged bottom plate for the Tune-o-matic bridge.

This Burst was previously owned and professionally used by Joe Bonamassa. Here is a quote of his, describing the guitar to Guitar Player Magazine:

“I’m the third owner of this truly special Burst, which was ordered in June of 1959 and delivered in August of that year. Although the stamp indicates that it was made in 1960, it’s obviously got all 1959 features. I sometimes call it Batman because of the weird winged bridge, a one-off. And I’m honored that Gibson Custom recently recreated the guitar in exacting detail as Collector’s Choice #3.”

In my 50 years of collecting, buying, and selling Bursts, I have always favored the 00 run of Les Pauls. They were manufactured in late ’59, to early ’60, and maintained all of the ’59 appointments, including the round ’59 neck profile.

This particular guitar has a wide, round ’59 neck profile that’s very appealing and feels incredible.

The guitar is really in Excellent condition, with minimal wear on it. It has extremely strong sounding pickups.

At some point, the original owner put newer tuners on it, and the shaft holes have been opened slightly. However, the footprint has not been changed.

Included with the guitar are the original single line, single ring Kluson tuners in the case pocket.

The case still has Joe Bonamassa’s label with the serial number and the word “Batman” on it.